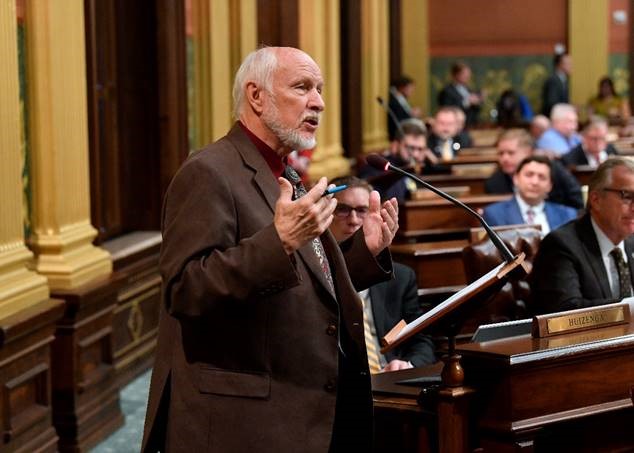 Rep. Gary Howell’s bill that guarantees increased opportunity for public input before the state Department of Natural Resources (DNR) makes decisions to approve or deny exchanges or purchases of state surplus lands has been signed by the Governor.

“The citizens of this state deserve ample time for public notice and to provide informed input on proposed sales or exchanges of state land,” Howell (R-North Branch) said.  “This new law mandates that our citizens will be afforded at least 30 days’ notice and the opportunity to weigh-in prior to the DNR taking action. There must be adequate consideration of public opinion. This new law guarantees the people a greater voice in the entire process.”

“The DNR owns 4.6 million acres of public land in Michigan. As an avid outdoorsman, I know that the availability of public land leads to greater hunting, fishing, and outdoor recreation opportunities,” Howell said. “We need to leave this legacy for our children and grandchildren.”

Howell’s latest initiative, Public Act 2 of 2022, places more power in the hands of citizens by amending the General Real Estate Powers of the Natural Resources and Environmental Protection Act. Howell is also the author of the 2018 law which mandated a state-wide DNR land use plan with guaranteed public input.

“The great bulk of the property owned by the DNR is in the northern part of the state.” Howell said. “We need to seek additional public land in southern Michigan. I want to make sure that as more land is procured, residents of Lapeer County and the rest of our state have significant opportunity for input on land transactions.”

“As a strong proponent of local control, I have also ensured that local jurisdictions in counties with high ratios of public land (primarily the Upper Peninsula and the northern lower peninsula) will retain the ability to veto transactions,” Howell said. “This will also provide more oversight over DNR actions. This common-sense legislation, guaranteeing greater public notice and input on land decisions by the DNR, is a win for all Michiganders.”

As I look back on nearly seven years as your state representative, it is with great appreciation for the trust you have placed in me to be your voice in Lansing.

State Rep. Gary Howell won a major victory in his ongoing fight against a Senate plan that would have stripped away local control over mining activities and given mining corporations full authority to establish gravel mines anywhere in Michigan – regardless of the health and safety concerns of local residents.

Rep. Gary Howell (R-North Branch), chair of the House Committee on Natural Resources, has led the Legislature in passing a historic eight-bill package of much-needed updates to Michigan’s solid waste and recycling laws.

Howell: Government is the Cause of Inflation

It is no secret that inflation rates in Michigan and the United States are out of control.